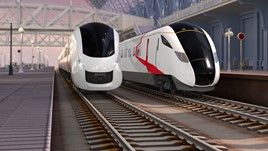 Battery-powered trains built by Hitachi in the North East could be in traffic by the end of 2023, after the Japanese company signed a deal to develop a battery hub in the UK.

Hitachi will work with Sunderland-based Hyperdrive Innovation to create batteries that can be mass-produced. This follows research by the train manufacturer that suggests there is a potential market for the technology of more than 400 trains.

Hyperdrive Chief Executive Chris Pennison added: “To date, only 42% of UK railways are electrified, with British trains using 469 million litres of diesel each year, emitting over 2.4 million tonnes of CO2 annually. The partnership underpins the vision that the rail industry can be a major contributor to the UK Government’s target of net zero emissions by 2050.”

The initial market for the trains is thought to be for Hitachi’s AT200 range (which includes ScotRail’s Class 385s).

On battery power, Hitachi said the trains will have a maximum speed of 90mph-100mph and a battery mode range of 56 miles. The battery life is expected to be ten years, and the charge will be continuous rather than merely by regenerative braking and charging at the end of service.