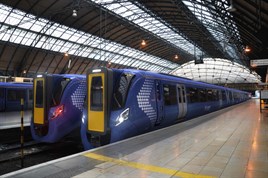 Construction of the first of 70 new AT200 electric multiple units will start next Spring, after Hitachi won a deal to supply 234 EMU vehicles for ScotRail.

The deal for the trains was confirmed on October 9, the day after Transport Scotland awarded Abellio the ScotRail franchise (RAIL 759). It consists of 46 three-car EMUs and 24 four-car EMUs. There is an option for a further ten trains later in the SR franchise. All will be 100mph EMUs.

Hitachi Rail Europe’s Chief Operating Officer Andy Barr told RAIL that the first route to see the new trains will be the Edinburgh to Glasgow route, which is to be electrified. This is scheduled for summer 2017. These will be the four-car trains, while the three-car trains will follow and will be used on newly-electrified routes to Stirling, Alloa and Dunblane.

He explained that the first four AT200 EMUs will be built in Japan, with the remaining 66 to be built at the company’s new Newton Aycliffe factory, currently under construction (RAIL 759).

Barr told RAIL: “There will be four prototype pre-production trains. In Newton Aycliffe there will be two production lines, one for IEP and the other for AT200.”

The first pre-production train, he said, will be delivered to the UK in early 2016. Construction of the bodyshells will start in the spring, he added. “We have been working on the design for 18 months.
There is also a lot of commonality with IEP.”

He said that the EMUs, for which a concept was unveiled by the company in London in July (RAIL 754), was designed with the ScotRail deal in mind. Barr told RAIL that the four-car EMUs will have a First Class area, but no decision has been made for the three-car trains.

Testing will be carried out on the East Coast Main Line in Scotland, prior to entering traffic.

Each EMU features cab-end and inter-vehicle gangways to facilitate the best use of passenger space.

The train has a 35-year design life and is made to complement the requirements as set out by Transport Scotland. In particular, they place a heavy emphasis on energy efficiency and weight reduction to minimise the impact on the infrastructure.

Barr said: “We wanted to ensure that passengers have a pleasant travelling environment with adequate table and toilet facilities, LED lighting and air conditioning as standard. Power sockets and WiFi are available throughout the trains, bringing modern comforts to the travelling public. In addition to this, the space underneath our cantilever seats provides room for luggage, which is supplemented by further luggage storage for commuter travel.”

A deal regarding maintenance of the trains is being worked on, and Hitachi is currently investigating which depot could be used. Barr said that Craigentinny could be an option because IEP will be based there, but he hasn’t ruled out other locations. He said that Abellio’s decision to use 27 High Speed Trains is also a consideration regarding maintenance locations. Barr said that Hitachi prefers to work in partnerships. He said that more than 60% of the AT200 supply chain will be British, and that the company has also recruited its first design engineers, who will be based at Newton Aycliffe.

Regarding future orders he said: “The AT200 bodyshell is influenced a lot by IEP, which is already cleared for Scotland. The difference is that AT200 is 23 metres long per vehicle and IEP is 26m. There are routes we are looking at.”

A spokesman from Abellio said: “We are delighted at the decision of Transport Scotland to award Abellio the new ScotRail franchise. The new fleet proposal was a major feature in our winning bid, and we look forward now to continuing the negotiations with our preferred supplier Hitachi.”

Regarding other orders, Barr said that should Hitachi win a deal with London Overground for 39 EMUs, then these would be AT100 EMUs, which are a Metro-style train.