Hitachi CEO has one eye on Brexit 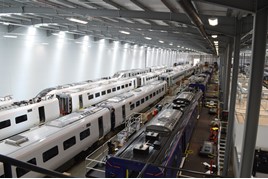 Newton Aycliffe may be busy, and Hitachi may be bidding for more work, but the company’s Global CEO for Rail, Alistair Dormer, has said that the outcome of Brexit could have a serious impact on its business plans.

Speaking to RAIL on August 17, on board the first run of a Great Western Railway Class 802, he said that the County Durham site has undergone a transformation over the past six months, during which time it has had to deal with a number of supplier issues.

“We are bidding for East Midlands and West Coast Partnership deals,” he said, adding that the offering for the former would be similar to the Class 802s (he cited confidentiality as a reason not to expand).

Currently the final GWR Class 800/3s are being completed at the site, followed by LNER Class 800 and ‘801’ Azumas, as well as the ScotRail Class 385s. But after that there are no orders. Speaking on the future of the facility, he said: “We are looking at building for further afield, but much depends on what the outcome of Brexit is going to be. We don’t want tariffs on bringing things in and out of Europe.”