Higgins: HS2 is ‘not a political football’ 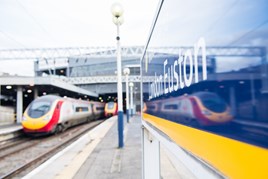 Speaking at the National Infrastructure Forum, HS2 Ltd Chairman Sir David Higgins reaffirmed that huge Parliamentary support exists for the construction of HS2 proceeding as planned, regardless of the colour of the new Government.

He said that construction of Phase 1 would definitely begin in approximately a year’s time, and that route plans for Phase 2b would be completed as scheduled later this year, before a Hybrid Bill can subsequently be presented to Parliament to authorise its construction.

He said: “We’ve had Royal Assent , which is very important, and we hope by mid-July to award seven construction contracts. Approvals are currently going through Government and we are on track.

“Enabling works have begun, and there will be 18 months or so of intensive design work so heavy construction work can begin in about a year’s time. We need to finalise our plans for Phase 2b by the end of the year, so we can finish our designs for a Hybrid Bill.

“I think it’s important to recognise that we had bi-partisan support , and that HS2 has never been a political football. HS2 has always been a good enabler to correct the economic imbalance of an underachieving north and an overachieving south.”