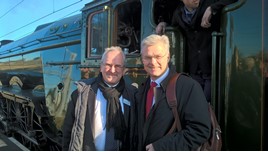 Outgoing Network Rail Chief Executive Mark Carne’s legacy will be that he “changed the culture of safety on the railways”, with many people alive today because of his influence.

He added: “It’s a remarkable achievement. The railway has had a cheap attitude to the lives of the people who work on it since it was built, and if you ask old BR people, even 15 years ago, 15 or 20 people were killed in industrial accidents a year, which is an appalling legacy that Mark has changed.

“The consequence of that is the workforce have a huge regard for him because they know he’s passionate about looking after them.”

Hendy also praised his outgoing colleague for improving the conditions for NR’s ‘Orange Army’: “He’s also been great on the dignity and diversity. He’s committed us to 50/50 recruitment of apprentices. which is great for an industry which is full of old white men.

“We’re also committed to having proper toilet facilities for those who work outside, and also stopping the practice of trains discharging human waste over trackside works which is a disgusting habit.”