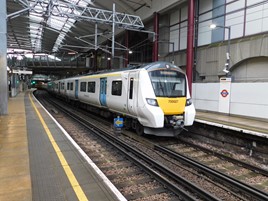 Hitchin and Harpenden MP Bim Afolami has criticised cuts in the number of peak-time services calling at Harpenden in the May timetable, and has called on Rail Minister Jo Johnson to explain the lack of consultation with passengers about the changes.

In a Parliamentary debate on Thameslink upgrades on April 18, the Conservative MP argued that the loss of fast trains calling at the station to cover for reduced East Midlands Trains (EMT) calling at Bedford would involve a net loss of two trains between 0630 and 0830.

Although some trains are due to be lengthened to 12 coaches from eight, Afolam argued: “In practical terms, the overall loss is eight carriages in that key two-hour slot, which represents a loss of capacity for over 1,100 people who will mostly have to stand.

He said: “There was an embarrassing lack of consultation on these changes. The Minister has admitted that there was never going to be a consultation because it would be ‘disingenuous’ to consult as there were no ‘genuine options’. That is not good enough for a timetable change of this scale.”

He added that in consultations with ‘experts’, he had concluded that there were other ways of maintaining the peak-time capacity to Harpenden. He asked Johnson to explain when the decision was made to change services to Harpenden, and why the station was experiencing a loss of service in peak times.

In response, Johnson said that EMT fast trains will not call at Bedford or Luton from May 2018 to December 2020, and claimed that overall the loss of capacity at Harpenden would amount to four coaches across the morning peak, with additional evening capacity adding 1,242 seats.

He also suggested that many Bedford commuters would opt to use the fast Thameslink trains, rather than those which stop at Harpenden. From December 2020, following completion of the Midland Main Line upgrade, Johnson says Thameslink will reinstate withdrawn fast services and add four more 12-car trains during peak hours at Harpenden.

On the lack of consultation, he said: “The impact of the Midland Main Line works only became apparent to us in November 2017. This short timeline meant that a specific consultation for Harpenden passengers was simply not a viable option.”