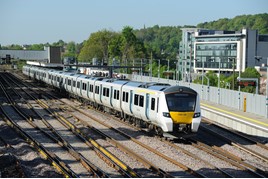 There will be a “hard review” of Govia Thameslink Railway, Rail Minister Jo Johnson told Transport Select Committee Chairman Lilian Greenwood during a House of Commons session on transport on July 5.

Greenwood said the Public Accounts Committee had concluded that threats to strip GTR of its management contract were not credible. Therefore, she asked, what could Government do to protect passengers from continued “appalling performance” if the planned July 15 interim timetable fails?

Johnson replied: “Rail operating companies will be held responsible for that portion of performance for which they are responsible and accountable, and that is now under way.

Johnson also told Bambos Charalambous (Labour, Enfield, Southgate) that Secretary of State for Transport Chris Grayling has indicated he is opening to breaking up the GTR franchise once the Thameslink Programme is in place (December 2019) and when that deal ends in 2021. Johnson confirmed that discussions have been held with Mayor of London Sadiq Khan regarding transfer of some services to Transport for London.

When announcing the creation of LNER, Grayling had said he was considering adding the Great Northern part of the GTR franchise (that serves Peterborough, Cambridge and Kings Lynn) to LNER.