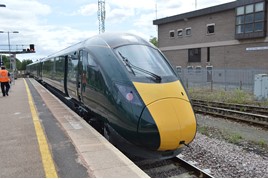 Great Western Railway launched its Class 802 fleet to invited stakeholders on August 17, the day before the first sets entered traffic.

Five-car 802005 carried stakeholders from Penzance to Exeter St Davids. It was the first of 36 Eversholt Rail-funded Class 802 bi-modes ordered specifically for the West of England route to carry passengers on the main line.

Hitachi Rail Group Chief Executive Alistair Dormer told RAIL on August 17 that construction of the final GWR ‘802’ was underway in Pistoia and that the fleet would be delivered by the end of the year.

GWR spokesman Dan Panes confirmed that all 36 trains would be in traffic by early-2019.