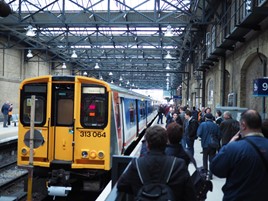 Govia Thameslink Railway raised £10,000 for charity by running a railtour to mark the end of the Class 313 electric multiple units.

Two of the 42-year-old EMUs were used for the October 23 charter, travelling on the Great Northern routes over which they have operated since 1976. One driving vehicle from 313064 was cosmetically restored into Network SouthEast livery, while 313134 City of London was the other EMU in action.

Almost 300 passengers travelled on the train, which ran almost a month after GTR withdrew the final Class 313s (after taking delivery of 25 six-car Class 717s from Siemens).

Operations Development Manager Grace Roche, one of the event organisers, said: “It was a really great day. There was an excitable atmosphere on board as people shared their ‘313’ stories and memories. At each station, there were crowds lining the platforms to take photos and videos as we passed through.”