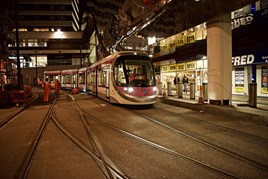 Midland Metro’s planned two-kilometre (1.24-mile) extension to Edgbaston and Birmingham’s Westside areas has been given the go-ahead.

Department for Transport will provide £59.8 million towards the £149m total cost. A further £84m has been raised locally through the West Midlands Combined Authority (WMCA), Birmingham City Council, Greater Birmingham & Solihull Local Enterprise Partnership, and others.

Five new stops will be served by up to ten trams an hour at peak-time when the new line opens in March 2021. It will run from Grand Central outside Birmingham New Street.

On a visit to Birmingham, Rail Minister Paul Maynard said: “This new extension will be a further boost to Birmingham businesses, and make travelling to work easier for commuters."