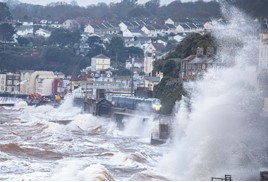 Speculation had been mounting that a blanket ban would be imposed on the Hitachi trains operating west of Exeter in poor weather (in the same manner as CrossCountry Class 220/221s), after October 30’s 1703 London Paddington-Penzance was cancelled at Newton Abbot while running some 93 minutes late.

The service, formed of 802004 and 802022, had been 12 minutes late at Dawlish, 42 minutes late at Teignmouth (three miles away) and 93 minutes late at Newton Abbot (eight miles). GWR confirmed the following day that the train had been taken out of service for checks, and that an issue surrounding the reset protocol was being examined.

GWR spokesman Dan Panes told RAIL that where possible, the operator will use the Up line in poor weather conditions for trains operating in both directions.