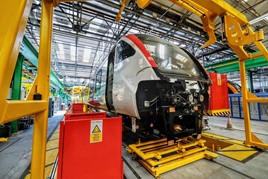 Two production lines are in place at Derby Litchurch Lane for the Greater Anglia Class 720 Aventras.

There are 89 five-car and 22 ten-car sets on order (665 vehicles). The shorter electric multiple units are being built first and by July 6 ten vehicles had been assembled, although the first two ‘720/5s’ had not yet been formed.

GA plans to use the Class 720s on all suburban services and on Great Eastern Main Line expresses and Standard Express trains. They will replace Class 317, ‘321’, ‘360’ and ‘379’ fleets on the West Anglia Main Line. They will also operate a third train per hour between Norwich and London Liverpool Street.

The Class 720s feature 24-metre-long vehicles and are owned by Angel Trains.

Testing is due to start in the autumn. The trains will be based at Ilford, with GB Railfreight contracted to deliver them.

GA is due to put them into traffic from March next year.