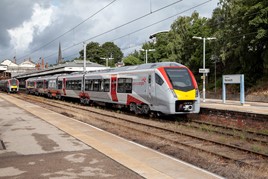 Real, tangible benefits are being delivered for East Anglian rail passengers with the introduction of Stadler Class 755s, according to Rail Minister Chris Heaton-Harris.

Speaking ahead of the official launch of the Greater Anglia Stadler bi-mode fleet at Norwich on September 4, Heaton-Harris said that Government’s priority is to deliver a “truly passenger-focused railway that sees our trains running on time. This investment will help deliver that, with greener, cleaner journeys and a more comfortable and reliable service for passengers.”

GA put the first four-car Class 755/4s into traffic on July 29, running on the Wherry Lines between Norwich and Great Yarmouth/Lowestoft (RAIL 885). Since then, the new trains have also started to serve the Norwich-Cambridge route.

“Our customers are telling us they think our new trains are amazing. We promised new trains would improve their journeys and that’s exactly what they’re doing. Feedback has been brilliant,” said GA Managing Director Jamie Burles.

Thomas Ahlburg, group chief executive of Stadler, commented: “After months of hard work, we are delighted that they are being introduced into service.