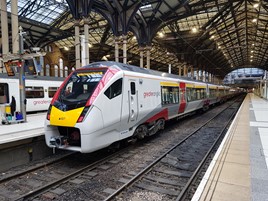 Greater Anglia ran the first of its ten Class 745 intercity electric multiple units in passenger traffic on January 8, when it 745007 formed the 0740 Norwich-London Liverpool Street.

Ian McConnell, GA franchise and programme director, said: “We’re very pleased to have brought one of our new intercity trains into passenger service.

“Last month was difficult for our customers, as signalling issues on our rural branch lines caused a great deal of disruption and also set back our new trains roll-out.

“We are making every effort to improve our service – and the first longer intercity train in service with all the facilities customers expected will start to make a difference to our intercity customers.

“This week we also ran one of our new bi-mode trains, which run on electricity and diesel, on the Ipswich-Peterborough route, where disruption has continued for much longer as a knock-on effect of the signalling issues.

“This year, we will concentrate on getting more new trains into passenger service and making sure they are as reliable as possible.”

The Class 745s have 757 seats which is between 23% and 41% more than the Class 90/Mk 3 sets they are replacing. The replacement should be completed by Easter.

Built by Stadler and funded by Rock Rail, the ‘745s’

They have plug and USB sockets, free fast wifi, air conditioning and improved passenger information screens. There is also a First Class seating area and a café bar service.

Like the Stadler Class 755s entering traffic with GA, the ‘745s’ have a lower floor and a retractable step at every door to bridge the gap between the train and platform.

Martino Celeghini, Stadler technical project manager at Stadler, said: “The roll-out of the ‘745s’ represents a key moment in the overall introduction of the two new Stadler fleets. These trains, which will run into London are built to exceptionally high standards.”