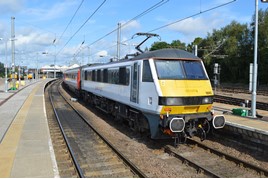 Greater Anglia says that in the four-week period from March 3-31, punctuality in parts of its network was the highest in years.

Overall, the Public Performance Measure (PPM) for the operator in the period was 91%, but that of inter-city trains between Norwich and London was 93.1% - one of the top four months for performance in the last 20 years.

On the Great Eastern Main Line between Liverpool Street and Essex and Suffolk, the PPM of 93.6% is said to have been the best for almost six years. Punctuality on its rural lines was 90.5%, but on some routes higher than 96%. However, performance was 86.7% on the West Anglia route to Cambridge, and 78.3% on Norwich-Cambridge - the lowest of any of its routes.