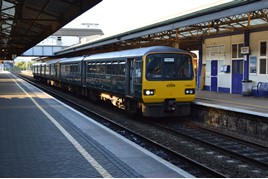 Pacers are to be retained by Great Western Railway into the New Year, meaning that all three operators of the trains will use them beyond the original withdrawal deadline date of December 31 2019.

GWR uses eight two-car Class 143s to operate trains between Barnstaple/Exmouth and Paignton. Based at Exeter, they were due to be withdrawn last year, but GWR kept them because of a shortfall in cascaded stock.

This time, the ‘143s’ are being retained because of continued delays to the Class 769 FLEX tri-mode project. These modified trains were due in traffic in the Thames Valley last May, but GWR does not expect the first to arrive at Reading for training until the end of this year.

That means that Class 165s and ‘166s’ that are currently in the Thames area, and which were due to displace the Devon Pacers, will have to stay put to cover for the unavailable ‘769s’.

GWR spokesman Dan Panes said six Class 143s are being used in the South West each day. He explained that the fleet details for December are not yet confirmed, but that all services will be wheelchair-accessible and include an accessible toilet.