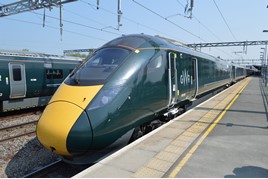 As of the May Bank Holiday weekend, Great Western Railway had accepted all the production-series five-car Class 800/0s, but admitted that it had still to accept the remainder of the five-car fleet.

Hitachi Rail Europe assembled 800005-800036 at Newton Aycliffe, and these are all now available for traffic. However, sets 800003/004 are being used for driver training and require interior modifications before entering service, while 800001 has been delivered to GWR but isn’t yet accepted.  The first nine-car ‘800/3’ has been accepted for traffic, with two more to follow.

GWR spokesman Dan Panes confirmed to RAIL on May 29 that there were issues with the trains, but that these were being worked on. They mainly relate to the couplers, reservation screens, announcements and the train management system (TMS).

“These are making life more difficult for customers than we would like, and we’re making sure Hitachi is working hard to resolve them,” he said.
A set of priorities has been agreed between manufacturer, operator and Government (which specified and ordered the trains), and Panes said performance was improving.

A software update was planned for the weekend of June 2/3, while in terms of the seat reservations, Panes told RAIL: “There may be some issues around our database, and we are watching that carefully.”

The ‘800/0s’ were originally intended to run largely as two five-car sets running together. Panes acknowledged there were currently more single five-car sets in traffic than envisaged, although he pointed out: “Of course, the difference with the ‘800s’ is if something goes wrong on one five-car set you can still run the second rather than cancelling a full High Speed Train.”