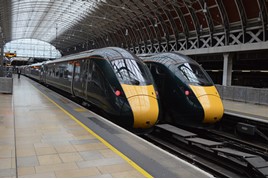 Great Western Railway is delaying its introduction of new Hitachi trains on stopping services to Newbury and Bedwyn, until further notice.

The five-car Class 800 and ‘802’ bi-mode trains were due to replace Thames Turbos from the start of January, when Network Rail completes electrification of the route as far as Newbury.

However, GWR says the trains now require modifications. New CCTV cameras will have to be fitted so that the driver can see when doors can safely be closed. The company says this is essential at smaller stations where platforms are unstaffed. Stopping services are operated without a guard.

The operator was unable to say when these modifications could be carried out. It will have to delay the cascade of older Class 165 diesel multiple units from the route.

Network Rail is wiring as far as Newbury. The new trains would continue through Hungerford to Bedwyn using diesel power. A turnback siding at Bedwyn was lengthened last summer in readiness for the new rolling stock.

GWR spokesman Dan Panes said that longer nine-car Hitachi trains on the route to the South West would be unaffected, as they carry guards and do not stop at small unstaffed stations in Berkshire and Wiltshire.