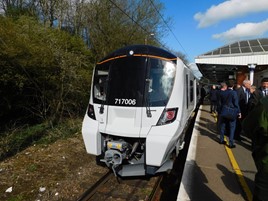 They were due in traffic from last autumn but issues with signal sighting for drivers has delayed their introduction (RAIL 875) until now.

Govia Thameslink Railway Chief Operating Officer Steve White told RAIL that the plan was for five trains to be in traffic by the end of April, after which the operator would evaluate performance and work on putting the rest of the trains into traffic. He said he expects all 25 will be in traffic by late-summer.

Gerry McFadden, Engineering Director at GTR, said: “We are transforming our passengers’ journeys by replacing their cramped, outdated 40-year-old trains, which are the oldest EMUs in mainland Britain, with fully-accessible, spacious, modern air-conditioned units with the latest in passenger information, onboard Wi-Fi and power points at every pair of seats.”

William Wilson, Managing Director for Rolling Stock at Siemens Mobility Limited, said: “Siemens has built these trains with one goal in mind – to transform passenger journeys to and from London by ensuring that services are reliable and offer as much space as possible.”

The Class 717s are financed by Rock Rail Moorgate, a joint venture between Rock Rail and Aberdeen Standard Investments. Rock Rail Chief Executive Mark Swindell said: “These trains are designed to deliver a vastly improved passenger experience and represent the first time in the UK that a fleet has been financed with direct long-term investment from pension and insurance companies.”