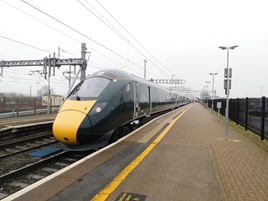 Secretary of State for Transport Chris Grayling was forced to defend his comments regarding bi-mode trains, during a House of Commons debate on April 19.

She then highlighted the recent National Audit Office report into electrification that said this was not the case (RAIL 850).

Grayling claimed: “Let us be clear. I stand by every word that I said then. We will deliver smart new trains and improved journey times for passengers on the Midland Main Line, as we are currently doing and will continue to do on the Great Western Main Line, and as we will do on the East Coast Main Line and the trans-Pennine route.”

He reiterated his claim that spending £1 billion on wiring the MML would save just one minute in journey times.

He made these comments just after stating: “Trains on the Midland Main Line require the addition of one engine to provide a little bit of extra acceleration, but they already exist, and will be great for that line as well,” during a debate with Jonathan Edwards (Plaid Cymru, Carmarthen East and Dinefwr).