Grayling: Opposition “do not care” 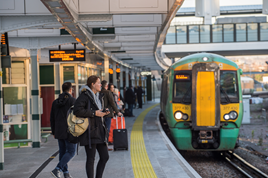 Secretary of State for Transport Chris Grayling has accused Labour of not caring, regarding the continued industrial action on Southern.

Grayling was speaking during a Parliamentary question session on January 16. He was responding to a question from Huw Merriman (Conservative, Bexhill and Battle), regarding the Government supporting proposals to limit strikers, or at least the impact of strikes, via legislation,

“There is a lot of interest in the matter, and a lot of calls have been made for such measures to be taken,” said Grayling.

“We are considering carefully how we approach future issues. Of course, nothing in legislative terms would solve the current dispute. I think my hon. Friend will join me in expressing the disappointment of Conservative Members about the fact that we have not heard from the Opposition today one word of regret or condemnation, and not one call for the unions to go back to work. They just do not care.”