Grayling: "I want the first hydrogen train to operate on our rail network within a short period of time" 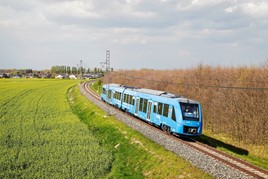 The prospect of hydrogen-powered trains has moved a step closer after Secretary of State for Transport Chris Grayling said their introduction was “a priority”.

Speaking in the House of Commons yesterday (January 18), he said: “I expect to see a transformation of technology on our railways over the coming years, with the introduction of different types of battery electric hybrid trains, and I see that as a priority. I want the first hydrogen train to operate on our rail network within a short period of time.”

Alstom is already trialling its hydrogen-powered iLint in Germany, with the train unveiled in September 2016.

This week The Times reported that hyrdogen-powered units could be used on the Great Western network.

In a debate on rail on January 10, Grayling, speaking about hybrid technology for various routes such as the Welsh Valleys, said: “What we are now seeing is the arrival of new technologies that will transform the way our railways work. We will soon see hydrogen trains. The new generation of trains – hybrid trains – is much cleaner than its predecessors. New technology is giving us extra versatility.”