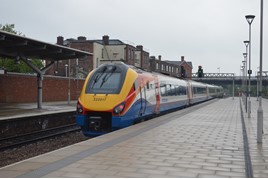 The first bi-mode trains for the new East Midlands franchises are expected to be ready for testing in 2021, according to Secretary of State for Transport Chris Grayling.

So far, no contract has been announced for the trains, which are due in passenger traffic on the Midland Main Line from April 2022. They were first announced by Graying in July 2017, when he cancelled electrification of the route north of Kettering.

Responding to Pauline Latham (Conservative, Mid-Derbyshire) in a House of Commons transport debate on May 2, Grayling said: “I hope and expect the first train to be tested in 2021. I must leave the announcement on the manufacture of the new trains to the operator, but my hon. Friend knows that I have signalled on many occasions since becoming Secretary of State how committed I am to seeing more trains manufactured in the United Kingdom.”