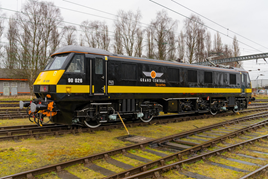 Four Class 90s per day will be used by Grand Central on its new London Euston-Blackpool North route that is due to start in May, the open access operator has confirmed.

GC has also announced that four rakes of six Mk 4s will be leased from Eversholt Rail until December 2026, with Alstom maintaining them at its Wembley depot and overnight servicing carried out at the former Arriva North depot at Blackpool.

Driver training is due to begin imminently, using three sets of Mk 4s on a short-term lease.