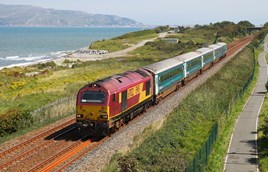 The devolved Welsh Government and the Department for Transport (DfT) have clashed over demands for compensation made by Welsh Economy Secretary Ken Skates, owing to the General Election allegedly delaying the Wales & Borders franchise process.

Skates has also called for the rebate paid by current train operator Arriva Trains Wales to the DfT to go to the Welsh Government instead.

His calls drew a blunt response from Secretary of State for Transport Chris Grayling, who wrote to Skates on August 8 saying: “I also wish to make clear that my authorisation for this will only be forthcoming once we have reached agreement on the funding claim your officials have made - a claim which would commit my Department to finding an additional £1 billion over the franchise term compared with today, and for which I see no basis.”