Government to continue running LNER to at least 2023 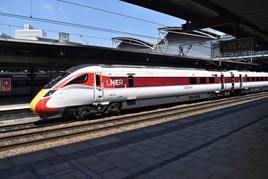 LNER, which operates the Intercity East Coast franchise, is to remain nationalised for another three years with the option for a further extension to 2025.

Directly Operated Railways-owned LNER is Government-controlled and has been since replacing Virgin Trains East Coast on June 24 2018. It is one of two franchises in the Operator of Last Resort (OLR) stable - the other is Northern.

RAIL first reported on the planned extension in July last year (RAIL 884), when a Prior Information Notice was issued. At that point, a Department for Transport spokesman said: “Claims of a long-term extension are absolute nonsense.”

An LNER spokesman told RAIL: “This will allow us to continue delivering planned improvements for customers, including completing the introduction of Azuma trains and associated increase in services, destinations and journey times as well as our enhanced customer experience.”