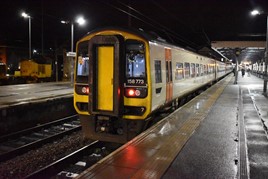 Splitting the Norwich-Liverpool Lime Street service at Nottingham remains on the agenda for the Department for Transport.

As part of the award of the East Midlands franchise to Abellio last year, the long-distance service was to be split with Norwich trains running to Derby and the Nottingham-Liverpool section taken over by either Northern or TransPennine Express.

In a Lords Written Reply on July 13, Transport Minister Baroness Vere told Lord Bradshaw that recent cross-industry work examining performance in the North West had looked at the impact of the Castlefield Corridor congestion on trains heading to Manchester from Sheffield.

It found that while trains from Norwich and Cleethorpes generally left their origin on time, by the time they left Sheffield around 30% were more than five minutes late.

“This confirms that the Norwich to Liverpool services lose time crossing the different congested corridors and key stations along its route. As a result, the trains then transmit further delay to the rest of the network,” she said.

“Industry data from the second half of 2019, on which individual trains cause the most delays to other trains, show that three of the worst eight trains on the whole GB network for transmitting delay are in this service group.”

“Therefore, both Network Rail and East Midlands Railway are firmly of the view that splitting these services at Nottingham will not only improve the performance of the respective halves of the split service, but also the performance of many other trains across the country.”