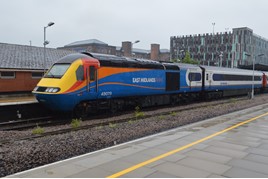 Government has confirmed it expects an update from East Midlands Trains in April regarding modifications of its High Speed Train fleet so that it meets disability regulations that come into force on January 1.

The HSTs are owned by Angel Trains (AT) and Porterbrook. While AT owns three sets, Porterbrook owns eight. These were due to be replaced by electric multiple units under original plans to electrify the Midland Main Line, however that was scrapped when Secretary of State for Transport Chris Grayling cancelled electrification north of Kettering and Corby in July 2017.

The HSTs must have retention tanks and accessible toilets although a letter from EMT Managing Director Jake Kelly to Nottingham South MP Lilian Greenwood states that sliding doors are not a requirement.

A Department for Transport spokesman told RAIL: “We are committed to making our railways accessible to everyone and removing any barriers faced by disabled people.

“East Midlands Trains have made good progress on improving accessibility, and the future operator will be fully aware of the PRM compliance requirement for their trains.”