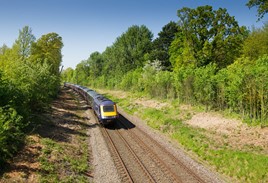 NR has been asked to suspend all felling during the current bird nesting season, except where the need is safety-critical.

Government said the review will consider how NR can “best ensure the safety of our railways, while also protecting wildlife and preserving trees”. It will also build on areas of existing best practice in vegetation management within the organisation, said the Department for Transport.

The review has been launched in consultation with the Royal Society for the Protection of Birds (RSPB) and the Tree Council.

“How we manage our trees and vegetation - and protect the wildlife that lives in and around them - is an important issue,” said Johnson.

A Network Rail spokesman told RAIL the company was constantly balancing the needs of the environment and its lineside neighbours with the needs and safety of 4.6 million people who use the railway each day.

“Last year we recorded over 400 incidents of trains colliding with fallen trees and another 1,000 where they caused delays to services, costing the industry over £100m,” he said.