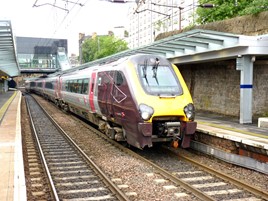 Longer trains and major changes in service patterns on the CrossCountry franchise are being suggested by the Government, in its public consultation released on June 7.

The franchise is due to be renewed towards the end of 2019, and the consultation follows an earlier exercise examining potential future timetables.

Among the ideas suggested are transferring local services such as those between Birmingham and Leicester/Nottingham to other operators, and curtailing or diverting one of the current CrossCountry trains serving Newcastle further south (for example, to Leeds or Doncaster) to help alleviate capacity constraints on the northern section of the East Coast Main Line.

At one extremity of the network, the Department for Transport (DfT) suggests that Great Western Railway’s twice-hourly service between Plymouth and Penzance from December 2018 could be covered by GWR operating trains earlier and later. From Torbay, the DfT argues that a “marginal reduction” from Torbay could then allow a half-hourly northbound CrossCountry service from Exeter to connect into the Plymouth-Penzance service.

From Edinburgh to Aberdeen, the DfT says it “may be possible” to reach agreement with Transport Scotland to provide alternative services.