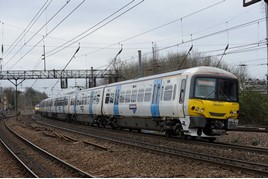 The remaining Class 365s will be withdrawn from traffic by Govia Thameslink Railway at the start of the May timetable.

Owned by Train Fleet (2019) Limited (TF19) and dating from 1994-95, the EMUs are being sent off-lease because the majority of peak-time additional services on which they are used are not currently operating during the reduced timetable, which was introduced as a result of the pandemic.

“The Class 365 trains have been helpful ‘peak busters’ on a busy railway, but don’t benefit from air-conditioning, CCTV or selective door opening, making them less flexible than our other fleets,” said GTR Chief Operating Officer Steve White.

“Releasing this fleet earlier than planned, and temporarily reassigning other trains to reflect customer demand across the whole GTR network, allows us to make savings which is good news for the taxpayer.”

Ten ‘365s’ were used by ScotRail on electric services in 2018, due to the late delivery of the Hitachi Class 385s. Their introduction won the ScotRail Alliance the National Rail Award Train of the Year accolade in 2019 (RAIL 888).