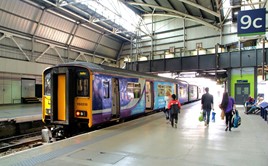 No preparatory steps have been taken by Government to take Northern into public ownership, Rail Minister Jo Johnson said on July 6.

Replying to a Commons Written Question from Kate Hollern (Labour, Blackburn), Johnson said: “Performance has improved and cancellations have reduced in the weeks following the timetable change. Northern’s compliance with its contract continues to be monitored, but no preparatory steps have been taken to bring it into public ownership.”

Hollern had asked if steps had been taken to take both Govia Thameslink Railway and Northern into public ownership.

Johnson said of GTR: “The Department is currently reviewing whether GTR met their contractual obligations in the planning and delivery of this timetable change. Should this review find that GTR have been negligent in their implementation of the timetable, all available options will be considered.”
A new timetable was due to be introduced on GTR on July 15, after this issue of RAIL went to press.