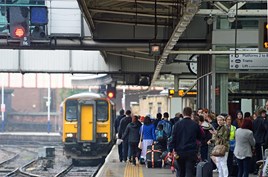 Passenger numbers rising fast, new stations, improved facilities and new trains are the result of policies followed by the current Government and not what Labour wants to follow, claims Secretary of State for Transport Chris Grayling.

In a Parliamentary debate on rail franchising and the public sector, Grayling was discussing the Cleethorpes to Sheffield line, which in 1993 had its weekday passenger service removed by British Rail.

Martin Vickers (Conservative, Cleethorpes) told MPs: “In 1993, the public sector British Rail withdrew services on the Cleethorpes to Sheffield line, making it a Saturdays-only service, which means that people in Gainsborough, Brigg and such towns cannot get to Cleethorpes to enjoy it all has to offer. As yet, the private sector has not seen fit to restore that service six days a week.”

Vickers asked if Grayling or one of his ministers would meet him and local MPs to discuss the matter.

Grayling’s response was that “we are always happy to talk”, before going on to say: “Today, the issues are overcrowding due to numbers rising so fast, new stations, improved facilities and new trains. That is the difference between the policies we have followed and the policies Labour Members want to follow.”