Government engages with Eurostar on threat to operator’s future 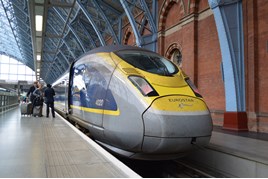 Government says it will continue working with Eurostar to help it through the significant financial challenges imposed by the COVID-19 pandemic.

In mid-December, the cross-Channel operator claimed it was “fighting for its survival” following a 95% drop in passenger numbers (RAIL 921). Services were reduced to one per day from London to Amsterdam, Brussels and Paris, while the operator will not serve either Ebbsfleet International or Ashford International until 2022.

Eurostar wants the UK Government to include high-speed rail in its support for the travel sector. However, as the company’s majority owner is French state railway SNCF, it has been suggested that the French government should offer financial support.

A Eurostar spokesman told RAIL on January 4: “We have been engaging with the French government as well, but access charges are considerably higher in the UK, hence that being more of a focus.”

A Department for Transport spokesman told RAIL: “We recognise the significant financial challenges facing Eurostar as a result of COVID-19 and the unprecedented circumstances  faced by the international travel industry.

“The Government has been engaging extensively with Eurostar on a regular basis since the beginning of the outbreak, including through the Global Travel Taskforce. We will continue to work closely with them as we support the safe recovery of international travel.”