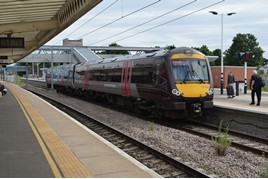 CrossCountry will increase capacity on its Nottingham-Birmingham-Cardiff route from May, as part of a package agreed with Government.

Longer term, XC will receive six additional vehicles designed to lengthen two-car Class 170 Turbostars, while the franchise has been asked to extend train lengths on its long-distance services to meet capacity concerns.

It is now negotiating with franchise owner Arriva regarding a longer Direct Award while decisions made in the Williams Review are implemented.

The operator has been asked to consider the potential for additional long-distance trains to be deployed as soon as possible, as part of a proposal for the Direct Award.

XC spokesman Richard Gibson explained: “The capacity improvements from this May relate to a change to the maintenance arrangements with West Midlands Trains (our maintainer) that will allow an increase in the number of ‘170’ sets in passenger service each day. From May 2021 the increase is the six additional ‘170’ carriages that we are leasing.”

Those extra vehicles will be cascaded from three-car WMT Class 170/6s that will move to East Midlands Railway as two-car sets, freeing up the centre car from each set to move to XC.

Gibson added: “The plan for the other long-distance routes is still being finalised with the Department for Transport as part of the longer Direct Award negotiations we’re working on.”

In a statement, DfT said it and XC were working to finalise plans for more seats through the introduction of longer trains on routes from Scotland, the North East and Manchester to the South Coast and South West. These would run on Mondays-Thursdays from December 2020.

It is understood that one option proposed was for EMR’s 27 Class 222s to move to XC, but these will not be available until the end of 2022.

“We want to fund benefits to address pressing needs and improve journeys for passengers in the short term, as well as in the future,” said Rail Minister Chris Heaton-Harris.