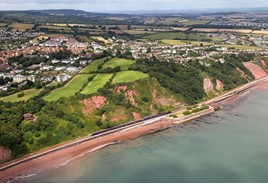 Engineers specialising in coastal, tunnel, cliff and railway disciplines have begun detailed studies along the route from Teignmouth to Dawlish, as part of Network Rail’s plans to safeguard the railway in the region (RAIL 852).

Following the collapse of the Sea Wall section at Dawlish in February 2014 (RAIL 742), NR completed its Exeter to Newton Abbot Geo-Environment Resilience study in 2016.

That study identified that unless a series of short, medium and long-term measures are put in place, extreme weather and coastal erosion is likely to mean that the events that closed the line in 2014 will occur more frequently.

The current phase requires a detailed geological and marine study that is now under way, conducted by Arcadis and Arup. This will enable NR to better understand what is happening to the cliffs and coastline, which in turn will allow the company to consider what measures can be put in place.

The work will last six to eight weeks. NR will then work with the teams for the rest of 2018 and early 2019, to put plans together outlining the options for discussion with the local community, council and Department for Transport.

Secretary of State for Transport Chris Grayling said Government was investing in the biggest modernisation of the railway, adding. “This includes making the lines from Dawlish to Teignmouth more resilient to the elements, to avoid a repeat of the damage and disruption caused by the storms of 2014.”

Mike Gallop, director of route safety and asset management for Network Rail, said: “The section of the railway is vital for many residents and communities in Devon and Cornwall. Safeguarding it for future generations remains one of our top priorities.”

Peninsula Rail Task Force Chairman Geoff Brown said: “The Government has continually stated that improving the resilience of the line at Dawlish is their number one priority. These studies represent the starting point to ensure that it happens.

“The results of the studies will help create solutions to improve the line and ensure that we do not see a repeat of the damage caused in 2014. In the long term, this will have huge economic benefits to communities, businesses and visitors in Devon and Cornwall.”