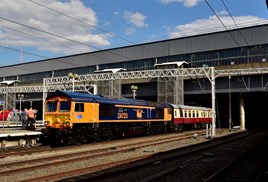 GB Railfreight raised more than £26,500 from two charters it ran in July and August.

The mastermind of Paul Taylor and Dale Williams, who were involved in organising last year’s GB15 charter as well as other charity trains, the trains ran on July 15 and August 13.

The first was ‘The Charity Chibble’, a circular tour from Ipswich that ran to Sheffield, back to London, and then to Eastleigh. This used 66775 HMS Argyll and 66778 Darius Cheskin from Ipswich to Peterborough via London and Cambridge, before 20118 Saltburn-by-the-Sea and 20132 Barrow Hill TMD took over for the trip to Sheffield. On the return, the ‘20s’ were replaced at Peterborough by 66777 Annette.

On August 13, ‘The Absent Charter’ ran from Newcastle to Eastleigh. The train ran as a passenger train one-way instead of running empty, after the stock was used the previous day for a staff charter.

GBRf 66762 replaced the advertised 47749 City of Truro for the leg from Newcastle to Crewe, after the ‘47’ had failed the previous day. As booked, the ‘66’ then gave way to 86101 Sir William A Stanier FRS, which hauled the train to London Euston, where 66723 Chinook was waiting to take the charter to its destination.

Both charters were staffed by volunteer train managers and guards, and an army of stewards on both days from across the businesses. All the money was donated to GBRf’s chosen charities: British Heart Foundation, The Ripple Project and Woking Homes.