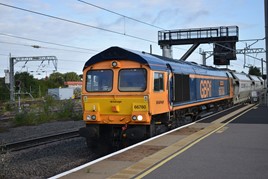 GB Railfreight Managing Director John Smith has expressed concern at delays to building HS2, in a letter sent to the man chairing an independent review into the line.

After the letter to former HS2 Ltd Chairman Douglas Oakervee was published on November 6, Smith explained: “The decision to review the project at this late stage has led to uncertainty across the construction supply chain across the UK. With a decision on the project now confirmed to be delayed until following the General Election, it is important that the next Government provides a clear view on the future of the scheme as soon as possible.

“Further delay will mean that people and resources which have been built up ready for work on Phase 1 to start might be lost, as business won’t be able to afford to keep them in readiness for a final decision to be taken. This could lead to the project facing further cost increases and delay as this capacity will have to be built up again.

“A decision to cancel the project would be a significant blow to the economy of the West Midlands and the country as a whole. It would also cause long-term damage to the construction and engineering sector and the UK’s ability to deliver major infrastructure projects.”