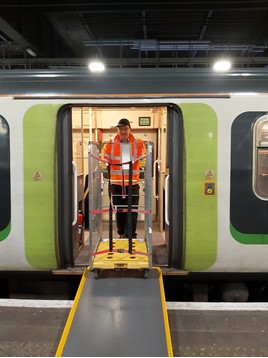 The trial was designed to showcase what could be successfully loaded and offloaded using standard roll cages at most main line stations and was the first of its kind in the UK to be carried out using a former commuter EMU. It also demonstrated the volume of goods that could be carried if the trains had their seats removed.

The April 1 trial was operated by GB Railfreight, which is in discussions with the Government about how such a service could help to deliver supplies to UK hospitals in the short term.

Longer-term, the plan could be to reintroduce a network of parcels services, as existed until early 2004 when EWS lost the Royal Mail contract. Since then, specially built Class 325s have carried parcels between various terminals, but with no main line station served.

“This successful trial shows how the railways can play a role in helping the speedy delivery of vital supplies,” said GBRf Managing Director John Smith.