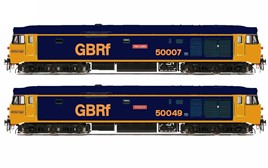 The Class 50 Alliance’s 50007 Hercules and 50049 Defiance are being repainted into the operator’s livery, with the former running to Eastleigh Works on January 15 for its transformation.

The locomotives will be available to operate selected GBRf trains on a ‘spot-hire’ basis, on work that includes moving locomotives to heritage railway events and rail tours. This will also release Class 66s for other duties, as the company remains eager to acquire more traction. The ‘50s’ will remain based at the Severn Valley Railway.

A charter from London to Penzance on March 23 will be the official debut for the two locomotives in their new colour schemes. GBRf is funding the repaint.

GBRf Managing Director John Smith said: “Our relationship with the Class 50 Alliance has grown over the years, with the painting of the two locomotives being an excellent way to recognise the fact. Having first witnessed Class 50s at Crewe in the early 1970s, I never thought the day would arise when one would be painted in the livery of GBRf.”