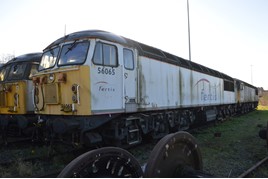 GB Railfreight (GBRf) has confirmed an order for 16 Class 69s that will be converted from Class 56s it bought last year.

The locomotives will be converted by Progress Rail, from which GBRf will also lease the ‘69s'.

Work involves replacing the existing Ruston-Paxman RK3 engines and control gear with EMD 12-710 Series engines rated for EU Stage IIIA emissions certification, and updated electronic controls based upon the Class 66 design. The Class 56s were built between 1976 and 1984.

Prototype 69001 is due for delivery in May 2020, and GBRf believes the locomotives will offer more power, reduced fuel consumption and improved emissions as well as enhanced driving cab environment compared with the Class 56.

In a statement, the operator added that the locomotives will also address the shortage of locomotives available in the UK. No work has been mentioned for the ‘69s’, but they will be able to replace ‘66s’, enabling GBRf to utilise its fleets more efficiently. The company is also known to be interested in operating construction trains for High Speed 2 and these are understood to be resource heavy.

“This is a fantastic move, which will enable GBRf to expand its operations significantly, whilst also providing the extra freight capacity the industry really needs,” said GBRf Managing Director John Smith. “I remember working on the ‘56s’ as a young engineer, and it really will be amazing to see them come back into use under the GBRf banner.”