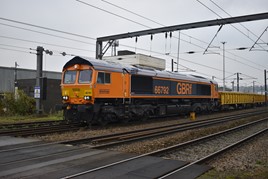 As many as 14 additional Class 66s could supplement the GB Railfreight fleet in the coming months, as the company continues to win new work.

The locomotives look set to be imported from mainland Europe and will be leased from Beacon Rail.

No identities have been revealed, although on December 22 last year the Office of Rail and Road approved the conversion of 14 continental Class 66s into UK Class 66s. The application was made by Beacon Rail on December 8, according to the ORR letter.

Of these, this will be the second 66734 to have been in the GBRf fleet (the original locomotive was written off and scrapped on site having hit a landslip on the West Highland Line near Loch Treig in 2012), while 66797 is one of five Class 66s currently being delivered to the UK (along with 66793/794, it is already here).

“GBRf, in conjunction with Beacon Rail Leasing, continues to assess the requirement for more traction to increase the service to our existing and new customers,” said GBRf Engineering Strategy Director Bob Tiller.