GALLERY: London's railways from the air 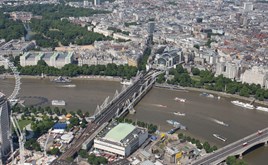 Network Rail has released these images taken from its helicopter showing stations and routes in the South East that will be the focus of major work – and closures – this August.

The helicopter has been surveying the tracks between London Bridge, Cannon Street, Waterloo East and Blackfriars, to make sure that the railway is in a good condition ahead of engineering upgrade work this August Bank Holiday.

Over the August Bank Holiday weekend and four working days afterwards there will be significantly fewer trains into London as NR continues to rebuild London Bridge station and the surrounding railway, as part of the Thameslink Programme. This is part of a £133 million programme of investment NR will spend on upgrading the rail network across Britain next month.

During these eight days, there will be no Southeastern services to or from Charing Cross, Waterloo East and London Bridge. There will be an amended timetable for this period and those trains that do run will diverted to Victoria, Blackfriars, Cannon Street or Waterloo.

By stopping trains from running on these lines for eight days, when the railway is significantly less busy than usual, Network Rail will be able to safely move the Charing Cross lines into their final position, routed through the newly constructed Bermondsey Dive Under and then into platforms 6 to 9 at London Bridge. This will mean that from January, Southeastern and Southern services will be able to ‘dive under’ the new Thameslink lines, reducing delays and improving the experience for millions of passengers travelling to and through the landmark new station.