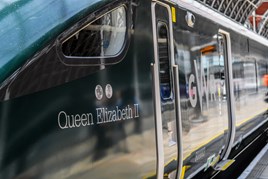 Her Majesty the Queen travelled aboard a Great Western Railway Intercity Express Programme Class 800 on June 13, to commemorate the 175th anniversary of the first rail journey made by a monarch.

Travelling with husband Prince Philip, HM The Queen travelled from Slough to London Paddington aboard 800003, before then naming the IEP Queen Elizabeth II.

Back on June 13 1842, a train carrying Queen Victoria was driven by Sir Daniel Gooch and assisted by Isambard Kingdom Brunel. GWR re-created the event, for which it was joined by Gillian White and Isambard Thomas, who are direct descendants of Gooch and Brunel. On June 13 2017, the IEP Class 800, built by Hitachi, was operated by GB Railfreight.