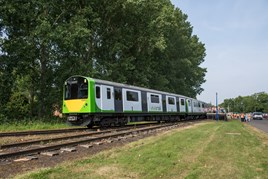 Vivarail’s Class 230 carried its first passengers on the national network on June 21, as part of Rail Live 2017.

Vivarail chairman Adrian Shooter said that feedback was “almost universally positive” regarding the trains, and told RAIL that a 60mph test was now planned for the main line.

Shooter said that prospective customers were interested in the original interiors, as fitted to the driving vehicles, and that these could work as capacity-boosting trains.

He confirmed there has been a lot of interest in the metro concept, which offers four doors per vehicle, as this potentially offers dwell times of only 30 seconds due to the double-width doors.

The centre-car of 230001 was fitted with various seats and tables, as well as charging points and a universal toilet. Any final decision on interiors will made by the customer that orders the trains.