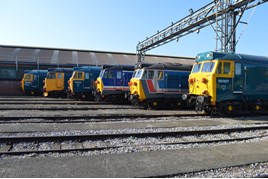 A highlight of the Old Oak Common open day for many was the gathering of seven Class 50s.

The Type 4s were synomous with the depot until the final examples were transferred away following their replacement on Thames Valley trains by Class 47s.