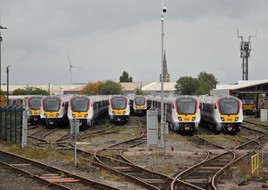 Greater Anglia has cancelled an order for 22 ten-car Class 720/1s.

The electric multiple units were meant to be in traffic by now, but Bombardier has yet to release any from Derby Litchurch Lane. Instead, GA will now receive an additional 44 five-car Class 720/5s, giving it a fleet of 133 EMUs from Bombardier.

In a procurement notice published on the Tenders Electronic Daily website on September 25, it stated: “To acquire rolling stock from another manufacturer/owner would oblige AEA to acquire rolling stock which has different technical characteristics, which would result in incompatibility and disproportionate technical difficulties in operation and maintenance. This is exacerbated in the context of the COVID-19 pandemic.”

A Greater Anglia spokesman told RAIL: "We are in the process of amending our order for Class 720 trains from Bombardier from 22 ten-carriage and 89 five-carriage trains to 133 five carriage trains, which gives us the same number of carriages overall – a total of 665.

“Bombardier has now built nearly half of the carriages and the first Class 720 train is due to go into passenger service on the Greater Anglia network later this year.”

A source told RAIL that the ten-car EMUs had been viewed as capacity-busters for peak-time trains to/from London Liverpool Street. However, the pandemic has affected the need for these, with a significant drop in the number of passengers commuting to the capital.

GA had ordered the EMUs on September 29 2016, after Abellio was awarded the nine-year franchise. The overall deal for the ‘720s’ was some £890 million, financed by Angel Trains.

The first had been due in traffic in March last year, with all 111 due in service by now. However, so far only six Class 720/5s have been accepted by GA following testing, and none have carried passengers. The operator hopes to have ‘720s’ in traffic this year but has not been able to confirm an exact date.

Nor has it commented on speculation that the trains will enter traffic on the Liverpool Street-Southend Victoria route initially, despite multiple sources suggesting that will be the case. It is also the route where the majority of driver training is taking place.

The only confirmed date so far is that the Bombardier trains will enter traffic on the West Anglia routes in the second half of 2021.