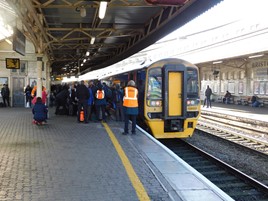 In a Commons Written Reply to Thangam Debbonair (Labour, Bristol West), who had asked what plans Government had to fund the first phase of the Metro West project and the reopening of the Portishead line, Johnson said: “MetroWest is a third party-promoted scheme in development by Network Rail.

“The Government has provided funding for the West of England Growth Deal which includes £53m for Metro West Phase 1. The Department will continue to work closely with the local councils in developing the scheme.”