FROM THE ARCHIVES: Greater Anglia Class 755 unveiled in Switzerland 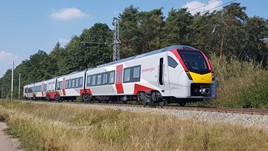 Greater Anglia has 38 BMUs on order from Swiss manufacturer Stadler, with four-car 755401 unveiled at the company’s commissioning centre in Erlen.

Two more BMUs were at the company’s nearby Bussnang factory, where Stadler is building 14 three-car and 24 four-car BMUs. Also at Bussnang were 20 Class 745 electric multiple units (GA has 20 12-car EMUs on order from Stadler).

The new fleet is due to start arriving in the UK in October, with the first BMU due to enter passenger traffic next summer. Exact routes and dates have yet to be confirmed, but it is likely that a new Lowestoft-London Liverpool Street service will be the first to feature the new trains.

“These modern trains are going to transform rail travel in East Anglia - with each one fitted with more seats, plug and USB points, air-conditioning and fast free WiFi,” said GA Director of Franchising and Programmes Mike Kean.

Ralf Warwel, Marketing Director of Stadler for the UK, added: “These are powerful and comfortable trains which share many similar design and operational concepts, as well as identical components which reduces training time for drivers and maintenance staff.

“The cab desk has a spacious and open design and allows for future upgrades of signalling systems, such as digital signalling.”

Stadler is building 378 new vehicles for GA, in a deal worth around £600 million. The BMUs will be used on GA’s rural routes from Norwich-Sheringham, Great Yarmouth and Lowestoft, as well as a new service from Norwich-Stansted Airport. They will also be used on Ipswich-Felixstowe, Cambridge and Peterborough, and a new service linking Marks Tey with Colchester Town. Additionally, BMUs will work the new Lowestoft-London direct service. The EMUs will be for the Norwich-London and London-Stansted routes.

In the first week of May, two BMUs were nearly complete (and were due to be at the commissioning phase by the time this issue of RAIL went to press). The first four-car BMU was at Erlen for commissioning (755401), although no interior was fitted.

Warwel explained: “The customer will also benefit from the fact that all engines are concentrated in a short vehicle in the middle, thus reducing the vibrations induced by the engines in the passenger areas. The unit design is also future-proof, allowing possible upgrades to full electric operation or even use of battery storage.”

GA is replacing its entire fleet during the franchise, with 665 Aventra EMU vehicles also on order from Bombardier.

Post-delivery, testing and stabling issues to be resolved

Around 20 new Stadler trains will be in the UK by next summer, ready for their introduction.

“One of the things we want is the Lowestoft through service. That was one of the reasons we want the bi-mode trains first,” Greater Anglia Joint Project Manager Steve Mitchell told RAIL.

The plan is to first remove examples of the current fleet that are not fully accessible to all passengers. This would be the Class 153s and ‘170s’, as well as the Class 37-hauled ‘short set’ of Mk 2s.

Mitchell told RAIL that the BMUs will enter traffic first, with the electric multiple unit fleet not far behind.

Deliveries would be one or two trains per week. All would be delivered to Norwich Crown Point, which Stadler has taken over.

Testing is already being planned. Mitchell explained: “A large part is Norwich-Colchester - that is the farthest we go. There are also Norwich-Lowestoft and Great Yarmouth. There will be fault-free running, too, even after the commissioning. Norwich-Cambridge will also be a route, and that will test the bi-mode capability.

“A large part of the testing will be done by ourselves, but Stadler will help and SNC-Lavalin is also involved.”

Mitchell said that a lot of work is ongoing with Network Rail, ahead of the introduction of the new trains.

“We’d like to transition on the move, but at the moment that is not possible. We are looking at 19 different transition locations.”

Stabling the new trains and storing the older fleet is also an issue. GA’s planned new depot at Brantham remains on hold, and Mitchell said: “We are looking at a lot of different places for stabling - Wensum Triangle, Victoria Sidings, Parkeston Quay… lots of places are being looked at, but the plan is not fixed.”

The 38 bi-mode units are fitted with a mixture of two or four engines within a central power car.

Each BMU has its electric traction in the driving vehicles. Stadler Commercial Project Manager Silvio Gemperli told RAIL this means that the diesel engines could be removed if required, and that (in effect) these trains are electric multiple units with a diesel engine.

Stadler has confirmed it is looking at alternative power, and that its FLIRT design is ideal for that.

Construction and testing of the 58 Stadler trains for Greater Anglia will be completed over a number of sites in a number of countries.

Stadler Commercial Project Manager Silvio Gemperli explained: “Winterthur is where all the bogies for all units are constructed.
“Bussnang is where the car body of the EMUs and the final assembly of the EMUs takes place. Final assembly of the four-car BMU sets one to three is here, too, and the powerpacks for sets one to eight, which allows for engineering interaction.

“Erlen is the commissioning centre. When a train is ‘wedded’ to its wheels, it then starts commissioning. The ‘wedding’ takes one day.”

Gemperli told RAIL that the car bodies will be fitted out at the company’s Hungarian factory at Szolnok. The very final assembly and commissioning of all 14 three-car BMUs as well as 755404-755424 will also be completed there.

He added that those not built in Bussnang will be built in Valencia (Spain). Construction of bodyshells had also begun in Poland, and these will be moved to Szolnok in due course.

Greater Anglia Joint Project Manager Steve Mitchell told RAIL that the first trains will go for type testing, and then to Poland for fitting out. Three Class 755/4s will not be finished initially, and these will be used for testing. Two EMUs will also not be fully finished and will undergo testing in the same way. Mitchell plans for mileage accumulation to carry on even after they have passed their fault-free mileage targets.