FROM THE ARCHIVES: ‘Industry fails the passengers’ as Northern suffers 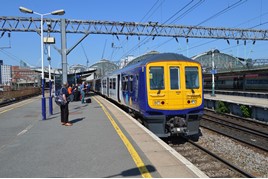 “I am frustrated that what should have been good news for passengers, with the introduction of new services, new routes and expanded capacity, has had such a poor start.”

That was the verdict of Secretary of State for Transport Chris Grayling, writing to MPs on May 29 regarding Northern’s performance in the days after the timetable change - between May 21-29, more than 2,500 trains were either cancelled, part-cancelled or had station stops omitted.

A lack of available crews and trains, coupled with incomplete infrastructure upgrades, meant Northern’s planned new timetable from May 20 was left in tatters.

A RAIL source highlighted how there were 170 timetable clashes at Leeds on May 21, saying: “It’s never happened before in my 30 years on the job.”

A Network Rail spokesman said: “Late timetables have certainly not helped the recent events, but there are many other factors across the industry involved. We are looking at understanding the root cause so that future changes can be implemented more smoothly.”

A RAIL source highlighted that while late delivery of the timetable was NR’s fault (it had to be ripped up and started from scratch due to delays to the Bolton electrification scheme, which meant Northern started “on the wrong foot”), industrial relations were also causing problems with issues such as crew shortages and rest day working.

Grayling wrote: “The industry collectively failed the passengers it serves. A combination of delayed Network Rail infrastructure works and reduced planning time meant that the new timetable was finalised much too late to permit adequate logistical planning for the timetable changes.

“Network Rail’s failure to deliver the electrification to Bolton and Preston in time for the new timetable had already caused severe operational planning issues, as the introduction of new electric trains has had to wait, leaving a shortage of trains to cover the increased number of services originally planned for the timetable change.

“The reduced time to plan a modified timetable has made this situation much worse. A significant number of Northern’s services have had to be changed at very short notice, leaving no time to resolve train scheduling issues which have arisen.”

Grayling wrote that Government had been “aware there may be some disruption in the early days of any new timetable change of this size, but the scale of the problem has far outstripped any expectation”.

He said the Department for Transport had been in regular contact with Transport for the North leaders, as well as NR and Northern, and that both he and Rail Minister Jo Johnson were monitoring the situation.

“We have insisted that Transport for the North and the two rail organisations put whatever resource they need to into resolving the situation, and in making sure that there is proper leadership of the recovery effort,” he added.

Grayling’s letter followed one from Mayor of the Liverpool City Region Steve Rotheram and Mayor of Greater Manchester Andy Burnham on May 24, after a phone call with Government which they called “welcome” but “too late in coming”.

Their letter called for four areas of immediate action: a shared and agreed analysis of the causes of the problems; that Northern’s Action Plan must be published with dates and milestones; that there needs to be an agreed and urgent deadline for when the significant backlog of outstanding Delay Repay claims will be dealt with; and that if Northern fails to adhere to the agreed Action Plan that a process starts to remove the franchise from Arriva.

They added: “Chaos on the North’s rail network has been so extreme and so prolonged that as a company Northern have lost the benefit of the doubt. They simply cannot be permitted to keep inflicting a miserable sub-standard service on hundreds of thousands of passengers across our region who have had to endure dire train travel for far too long.”

On May 23, DfT had issued a statement declaring that improving performance of Northern services was a “top priority”, and that “extra services, increased driver training and additional driver rostering” would take place. It added that Johnson was leading discussions with Transport for the North.

DfT said the improved rostering was designed to get more trains running, while increasing training on new routes would get more services running as soon as possible. There was also an aim to get more extra peak trains running on the Bolton corridor.

Grayling said on May 23: “Introducing new services, providing passengers with faster journeys and delivering more seats, will be part of this essential transformation - but the level of disruption that passengers have experienced in the North is unacceptable.

“Improving the service for Northern customers is the number one performance priority for my department and we will work with the industry to keep disruption at a minimum.”

Johnson said: “Northern is running hundreds more services now compared with last week, helping deliver the biggest change to rail timetables in a generation. But passengers have been disrupted and there is concern about performance among people who use the railway.”

Shadow Transport Secretary Andy McDonald said: “Train companies like Northern and Govia Thameslink Railway have had years to prepare for these changes. The companies have failed to manage, recruit and train enough staff to deliver these services. Once again, Chris Grayling is letting train companies off the hook while rail passengers pay the price.”

TfN Chief Executive Barry White said: “We are extremely disappointed and concerned with the inadequate performance of Northern. We have received a timetable recovery plan from Northern to address these concerns and improve the rail experience for passengers. Both Transport for the North and the Department for Transport, through the Rail North Partnership, will be monitoring progress against the plan on a daily basis.”

RMT General Secretary Mick Cash: “This situation is only allowed to continue with the connivance of Chris Grayling and the Tory Government who refuse point blank to act. RMT is repeating the call again this morning for Govia and Arriva to have their contracts terminated and the franchises returned to public ownership.”